The two number one seeds face off in Super Bowl 49 in Arizona this Sunday (depending on where you are). The Super Bowl is probably the biggest annual sporting event in the world. There are many reasons for this, including the half time show, the advertisements, the lead up, oh and the game.

This year we have the New England Patriots facing off against the Seattle Seahawks. The two best teams in the league and a preferred clash for all the football purists. The Patriots polarise sports fans with golden boy Tom Brady at QB, the stoney-faced Bill Belichek as Head Coach and the well-documented history of the New England Patriots franchise. From Spy-gate to Deflate-gate and everything in between, including 5 previous super bowl appearances in the Brady/Belichek era.

After the Seahawks completed one of the most remarkable and unlikely comebacks to beat League MVP Aaron Rodgers and the Green Bay Packers, the Seahawks were installed Superbowl favourites. The line openend around Seattle -2.5 (as high as -3) but once New England started dismantling the Colts at Foxborough, that line started to head towards pick ‘em ($1.90 each of two). By the end of the rout in New England, the Patriots were almost the consensus favourites for the game. As is stands the line is New England -1 and likely to head towards -2.5 once the overwhelming public money is bet on New England.

Although most casual bettors will bet on the Patriots, the informed money will probably be on the Seahawks, especially closer to kick-off if the line continues to head towards -2.5. The line is likely to close between pick ‘em and -2.5 with the Patriots favoured to win their 4th Super Bowl in the Brady/Belichek era.

A major part of the betting markets is the recent game bias. This is amplified in the Super Bowl where the public bet around $100 million on the game in Las Vegas alone. What the casual bettor sees in recent games is what they are likely to bet on, which tends to leave value on the opposite side.

Last year, the public watched Peyton Manning and his high powered Bronco offence surge towards a Super Bowl. The line opened Seahawks favoured at around -2 and closed Broncos -2.5 or close to that number. It is similar to this year and regardless of the actual game handicap, the fact that the game opened at -2 for Seattle means that many Bookmaker opinions have Seatttle as the better team.

For New England to win, you need to enter the mind of Bill Belichek. This is nigh on impossible to do. He is a once in a generation coach who has the ability to attack opposing team’s weaknesses and motivate his players to execute the game plan. Clearly, the Seattle strength is their defence.

How Belichek will run his offence will be very interesting in this game. Will he continue to run Blount or will he rely on Brady and the passing game? Will be spread out his receivers and make it harder for Seattle to double team Gronkowski and force the Seahawks to defend the whole field? 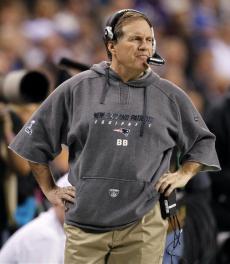 Blount has been extremely effective against the Colts in his recent history with the Patriots. He has been a solid RB in other games but not always against the caliber of defence as Seattle. If Belichek wants to get Blount active and effective early in the game, it will be interesting to see if this tactic is successful and can open up some passing plays for the Patriots. If the run game is effective it may force Chancellor and Thomas to come up in the box to block some running lanes. Seattle is not afraid to allow their cornerbacks to go one on one but the safety help has been a huge part of this defence and none better than the Chancellor/Thomas combo. New England are not one dimensional, so it is expected that they will have many options to come out on top. If Blount is effective it will be a very tough ask to stop Brady and his passing game as well.

The defence will show up and the defence will be formidable. Injury concerns to Thomas and Sherman are the only possible worries for the Seahawks. Last year the Super Bowl was won by the defence. The Legion of Boom has set up many games for this team but if New England can score this will require a bigger contribution from the offence.

As two-touchdown favourites against Carolina, Seattle was ahead 24-17 with the Panthers driving late in the game. A pick-6 sealed the win and although the stats look good for Wilson, he and Lynch were unable to assert their dominance on the game. This is obviously not their modus operandi but coupled with the Packers disaster on offence, the form looks shaky at best from the last 2 games. In saying that, the last few drives in the Packers game saw the Seahawks at their best. The Wilson/Lynch combo were excellent and somehow pulled out the win. They opted for a number of read/option plays and the running game looked unstoppable. Lynch ended up with 157 yards and Wilson recovered from 4 picks to pull out the win.

The Seahawks will need to get a sustained production from Wilson and Lynch. They will require a solid offensive performance and this stems from the running game. Look for more read/option and a safe start to the game (see prop bets) after the 4 pick disaster at home last week.

Most places have the total points for the game at 47.5. This has come down a couple of points from the opener and may head back up to 48 or 49 by kick-off if the public wants to bet the over (as they normally like to do). When you have a great defence like Seattle, the tendency is to look under in most of their games.

The problem is, like we saw last week, it can be the greatest bet ever and then you get snuffed out in OT. No real opinion on the total, however, in terms of scoring in each half, the first half may be a little less prolific if both teams want to settle in and especially the Seattle offence. With the running games likely to be in effect early, the 2nd half being the highest scoring may be the best option at around $1.91.

One second about deflate-gate is probably necessary. It has been a blown up (pun intended) story all week and hopefully it disappears although unlikely. It will have no real impact on player preparation or when playing the actual game. I would expect the Patriots to be seasoned enough at Coach and QB to not let it impact their performance.

The key to prop bets is to pick bets that are not contingent on the result of the game. ie You can get the game winner wrong but still collect on your bet. If you bet Gronkowski to have 3 TD receptions, that is very likely to happen if the Patriots win and very unlikely to happen if the Patriots lose. Bets that will not have a huge correlation to the result are preferred. Unless you are extremely confident on who will win the game, this will ensure you can win regardless of the game result.

Think golf. If you hit 5 drives and all 5 went wide right out of bounds or wide left into the water you lose some confidence. Next round, first hole, you do not have great confidence in your driver. Maybe pick up a 3-iron and punch one up the middle to get you going? This is what I think will happen here.

Wilson is coming off the 4-pick disaster last week. I expect the first series to be a number of Lynch rushes and maybe a screen pass or a short pass to get his confidence up. He is still a young QB and it would be wise to build into this game. His passing completion % on the season is 63% and 56% in the 2-playoff games. I expect a safe, easy throw first and therefore a completion.

Wilson has 7 interceptions in the regular season and 4 more against Green Bay (0 INT in 11 of 18 games). With Lynch likely to feature prominently Wilson can rely less on the passing game to gain big chunks. Last week all 4 picks were targets to Kearse. This is be adjusted and accounted for going into the Super Bowl.

We all know the productivity of Blount against the Colts (30 for 148 – 3TD last week). Since the Detroit game (when Blount moved across from the Steelers to NE) he has been able to go over 62.5 three times in seven games. One of those games was the Colts massacre last week and the other two games Blount had longest gains of 23 and 33. Seattle are the best defence in the league and Blount will be up against it to gain huge chunks.

The Baltimore game saw the pats run it with Blount 3 times for 1 yard and no carries in the second half. Miami held Blount to 17 yards on 8 carries. The better defences in the league have had success and Seattle is certainly in that category. Just last week, against a team Blount has had huge success against (Colts), the under/over rushing yards was 38.5 and was bet up to 44.5. The adjustment in one week is too much.

Seattle played their worst game in a long time to overcome Green Bay. If they can raise their level to what we have been accustomed to they will win this game. If +2.5 is available there is no doubt that is value. The Patriots were written off after being demolished by Kansas City earlier in the year and Seattle was never really in control of the division until after the Arizona win. Both teams have not been all conquering by any means. If you play this game 11 times, I think Seattle wins 6 of them however if anyone can poke holes in this brilliant defence it is Brady/Belichek.

This entry was posted on January 29, 2015 by thefiveminuteguide in Events, On the Money, Sport.